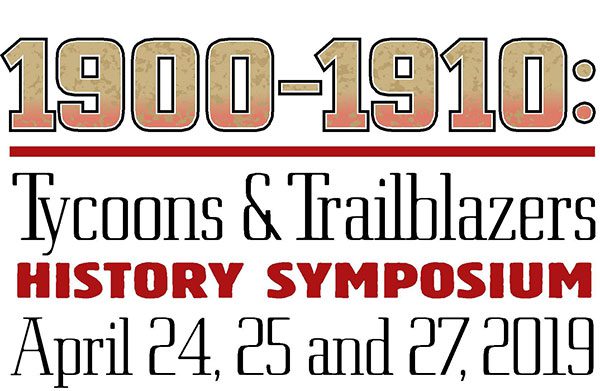 OPEN TO THE PUBLIC

Register Today! Only $60 Per Person. Space is Limited.

Come explore the first decade of the 20th Century with national and regional authors, historians and experts. Our rural nation was about the business of peace, prosperity and progress. Americans were optimistic and self-confident. In the 35 years since the Civil War the United States had become the first among the world’s industrial powers. The rise of new technologies was transforming America and the world from the good old days to complex modern times. Muckraking journalists published exposes on many moral problems: child labor, teeming slums, widespread offenses by corrupt politicians and ruthless corporations. This history symposium will explore some of the stories of this new century:

Registration is $60. Meals are extra. Seating is limited. Questions? Please call (775) 333-9300 or email bclark@automuseum.org Pre-registration is required of all participants.

The Museum has a new caterer, Roundabout Catering, that has developed a wonderful menu for Wednesday and Thursday’s dinners and Saturday’s lunch.

The Museum will be applying to the Nevada Department of Education for Teachers to Earn One Inservice Credit. The Museum has received this annually for its symposiums.

Make sure to copy Registration number after successful submission.

Thank you for payment.