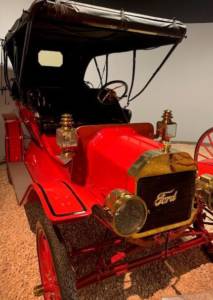 In his 1922 autobiography, Henry Ford said that in 1909 he told his management team, “Any customer can have a car painted any color that he wants so long as it is black.”  Some historians are not sure he uttered those exact words, but it is a fact that most of the 15,000,000 Model T Fords produced were black.

Yet, here at the National Automobile Museum sits a bright red 1909 Ford Model T Touring car donated by the Harrah’s Hotels & Casinos. Many visitors think perhaps the late-Bill Harrah, who loved Fords and had one of the world’s best custom paint shops, applied the color to spite Henry’s proclamation.

But those who know Harrah better are aware that he was a stickler for authenticity in nearly all his restorations. It turns out that in the early years of production from 1908 to 1913, the one color you couldn’t get from Ford was black. Model T’s were only offered in gray, green, blue, and bright red. Green was available for the touring cars, town cars, coupes, and Landaulets. Gray was for town cars. But bright red was reserved only for select touring cars. By 1912, all cars were being painted midnight blue with black fenders. Only in 1914 was the “any color so long as it is black” policy finally implemented.

Why the change? The Model T Ford, more than any other car, was truly affordable for the masses. To achieve lower prices (eventually $500), he need to reduce labor to mass produce cars in as short of time as possible. The red paint on our Touring car required several days to cure and thus held up the entire “assembly line.”

Ford went to black-only from 1914 to 1926 since it was one color that dried in hours, rather than days.  The paint was also less expensive and more durable.  The process was called “japanning,” which today is known as baked enamel. And baked enamel worked best if it was black.

Only when Chevrolet and others began to cut into Ford’s market share in 1925 and 1926 did they give in and once again made colors optional.

Your ticket for the: What Color Black Do You Want?