Online shopping is big now, even for automobiles. But in 1952, the internet was still decades away (1983), and it would be seven more years before the World Wide Web (1990). But there was something almost as good: The Sears Catalog.

Sears Department Stores began in 1886, but their catalog division took off in 1895 selling watches through the mail. By 1908, they offered almost everything from their “wish book. You could even buy a house (at least a kit to build one) and, until 1912, an early Lincoln known as the Sears “Model L”. By the 1920s they added Craftsman (tools) and Kenmore (appliances) brands. Allstate Insurance was next in 1931.

By 1950, auto magnate Henry J. Kaiser had introduced a two-door sedan known as the “Henry J.” But it didn’t sell well. Intrigued by Sears’ catalogue success, Kaiser joined forces with Sears, made a few modifications, and launched the 1952 “Allstate” automobile. It was really a “Henry J” with a few upgrades including badges on the hood and rear deck, a more upscale interior of Saran plaid, tires-batteries-accessories from Sears, special hubcaps/wheel covers, horn buttons and instrument bezels, a locking glove box and trunk lid.

Advertisements (and such renowned authorities as Google) said that Allstates have a “large rear deck opening with counter-balanced lid (which) gives easy access to the luggage compartment and spare tire.” If you look close, our car is definitely an Allstate, but the trunk lid doesn’t exist. In reality, many lower-end Allstates did not have the trunk opening option.

Ours does feature “a good capacity, well-appointed shelf-type glove compartment (which) adds to your driving convenience. Pull-type door is easy to open.” Best of all (the catalogue says), “you could pay $200 to $500 more for other full-sized two-door sedans.” A basic Allstate like ours sold new in ’52 for just $1,395. (A comparable two-door “Mainline” Ford was going for $1,570)

While many feel the styling is dull and boring, both Allstates and Henry J’s were big hits with drag racers. 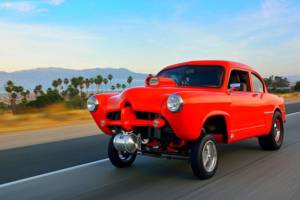 Your ticket for the: The 1952 Allstate